http://www.bigozine2.com ROIO of the Week [Recordings of Indeterminate Origin] 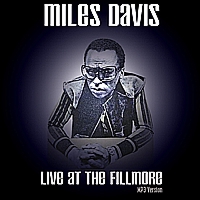 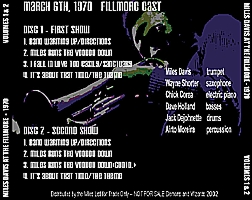 Imagine Miles Davis as the opening act for Neil Young? But that's the deal in the '70s, especially when you wanted to play New York's Fillmore. The Davis Sextet opened for Neil Young and Crazy Horse and The Steve Miller Blues Band for two nights at the Fillmore East, March 6-7 (Friday-Saturday).

This was the Miles who had released In A Silent Way and Bitches Brew less than a year before, had put out Live-Evil the previous month and would release Jack Johnson the following month.

If playing support act bothered Miles, it didn't show in his music. Miles wrote in his autobiography of that period: "The sound of my music was changing as fast as I was changing musicians, but I was still looking for the combination that could give me the sound I wanted. Jack DeJohnette gave me a certain deep groove that I just loved to play over, but then Billy Cobham gave me a more rock-like sound. Dave Holland played the stand-up bass and I could groove behind that in a way that I couldn't when Harvey Brooks brought in his electric bass sound. The same thing with Chick (Corea), Herbie (Hancock), Joe (Zawinul), Keith (Jarrett) and Larry (Young), too. I was seeing it all as a process of recording all this music, just getting it all down while it was flowing out of my head."

There were two shows each night. Columbia recorded both nights, but this show remains unissued. This two-night gig was Wayne Shorter's last as a member of the Sextet. (He did remain with Davis for a studio date on March 17.) Columbia finally released the March 7 show as It's About Time in 2001. This series of shows at the Fillmore in the '70s was available at Miles Trees and the general consensus was that this March 6 recording sounded much better than the official March 7 release.

As an aside, between these two shows Bill Graham brought in a Sabrett hot dog vendor off the street to feed the bands, the crew, and some members of the audience.

If you like the electric Miles or the jazz-rock Miles, this one's for you.

Click on the highlighted tracks to download the MP3s (these are high quality, stereo MP3s - sample rate of 192 kibit/s). As far as we can ascertain, these tracks have never been officially released.